Not Feelin’ The Love 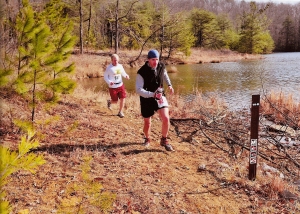 Conditions in 2009 were also quite good.

2007, 2008, 2009, 2010 I was definitely feelin’ the love. This year unfortunately not so much. I was in the mood, but physically just wasn’t up for the challenge. On Saturday while I was romping around the woods at Eagle Creek the hardcore trail runners were in Kentucky for Louisville’s Lovin’ The Hills 50k. I’m a little bummed that I wasn’t trained for the race. This is one of the toughest 50k races you will find. The first time I ran LLTH in 2007 I was a trail running neophyte. I had never run a 50k. I had no idea what I was getting myself into. I can’t remember if it snowed during the race or not, but the trails were icy and slick. I went down several times. My knee was sore before the race even started. At the 22 mile mark I almost threw in the towel, any sane person would have. My friend Tom who was also running his first 50k was gracious enough to stay with me. He and I finally crossed the finish line after 9 hours 14 minutes. On the ride home we were both adamant about not being interested in running that race ever again. So naturally we both returned the next three years in a row. My best time was 6:30:34 in 2008. The weather and trail conditions then were about as good as you could expect for this time of year. After hearing about the conditions this year I’m not all that sorry I missed it. Maybe I’ll feel the love again next year.

This entry was posted in Uncategorized. Bookmark the permalink.